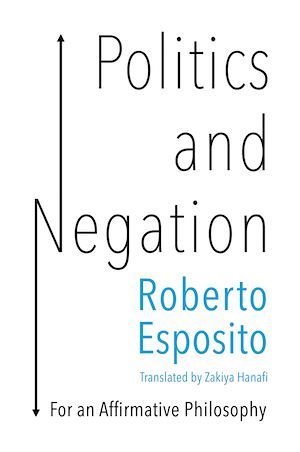 For some while we have been witnessing a series of destructive phenomena which seem to indicate a full-fledged return to the negative on the world stage - from terrorism and armed conflict to the threat of environmental catastrophe.  At the same time, politics seems increasingly impotent in the face of these threats.
In this book, the leading Italian philosopher Roberto Esposito reconstructs the genealogy of the reciprocal intertwining of politics and negation.  He retraces the intensification of negation in the thought of various thinkers, from Schmitt and Freud to Heidegger, and examines the negative slant of some of our fundamental political categories, such as sovereignty, property and freedom.   Against the centrality of negation, Esposito proposes an affirmative philosophy that does not negate or repress negation but radically rethinks it in the positive cipher of difference, determination and opposition. The result is a rigorous and original pathway which, in the tension between affirmation and negation, recognizes the disturbing traumas of our time, as well as the harbingers of what awaits at its limits.
This highly original and timely book will be of great value to students and scholars in philosophy, cultural theory and the humanities more generally, and to anyone interested in contemporary European thought.